The Cretan tradition is inextricably linked to the monasteries. In all counties there enough to explore and admire. Wonderful paintings play our religious tradition, through the tendency of Renaissance Cretan School of Painting.

The Cretan Monasteries helped and aid the revolution against Turks.

The majority of the monasteries are open to the public for certain hours, and appropriate wear is necessary, while taking photographs is prohibited in many of them.

Heraklion houses some of the most historic and oldest monasteries. The most famous are: 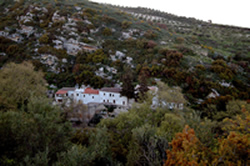 At Houdetsi you can visit the monastery of Panagia Spiliotissa. It is a monastery hidden in a side of the homonymous gorge, surrounded by lush vegetation, accessed only by the lush path of 500 meters from Houdetsi. The Monastery was built in the cave, and it is believed to have been founded in 1000 AD, it was dedicated in the Assumption of the Virgin, because of the image of the Virgin Mary that was found in the cave.
The monastery is now a dependency of St. Catherine of Sinai and serves as a nunnery. Its characteristic is that it is also one of the smallest active monasteries in Crete.
You can also visit the Monastery of St. George, which was built during the last years of Venetian rule and acquired such a reputation that the next year became one of the largest pilgrimages in Crete.