At Christmas, after the long fasting period, meat, pork in particular, is a major player on the festive table. Housewives also prepare Christmas breads, called Christopsoma or Stavropsoma (Christ’s breads of Cross breads) famous for their elaborate decoration and the special motifs used, different for each locality. For New Year’s Day they prepare kourambiedes (a type of shortbread covered in icing sugar), melomakarona (small biscuit-like sweets sprinkled with walnuts and diluted honey) and the vasilopita (a special cake or pie containing the ‘lucky coin’). In different places different sweets are prepared, such as methysmena koulourakia (literally: drunk cookies, made with wine) in Merabelo, xerotigana (honey-dipped spiral pastries) in Ierapetra, etc. On the eve of Epiphany the dish of the day is palikaria (a dish made with various legumes and cereal grains, such as lentils, chick peas, beans, broad beans and wheat); during Carnival they make agnopites (literally: purity pies, a type of cheese pie) and tzoulamas (pie filled with chicken livers, raisins and nuts), at Easter they cook lamb, mageiritsa (a soup made with lamb offal) and avgokouloures or lambrokouloures (sweet round bread loaves, literally: egg-loops or Easter loops) as well as kalitsounia (small pies filled with cheese or herbs). 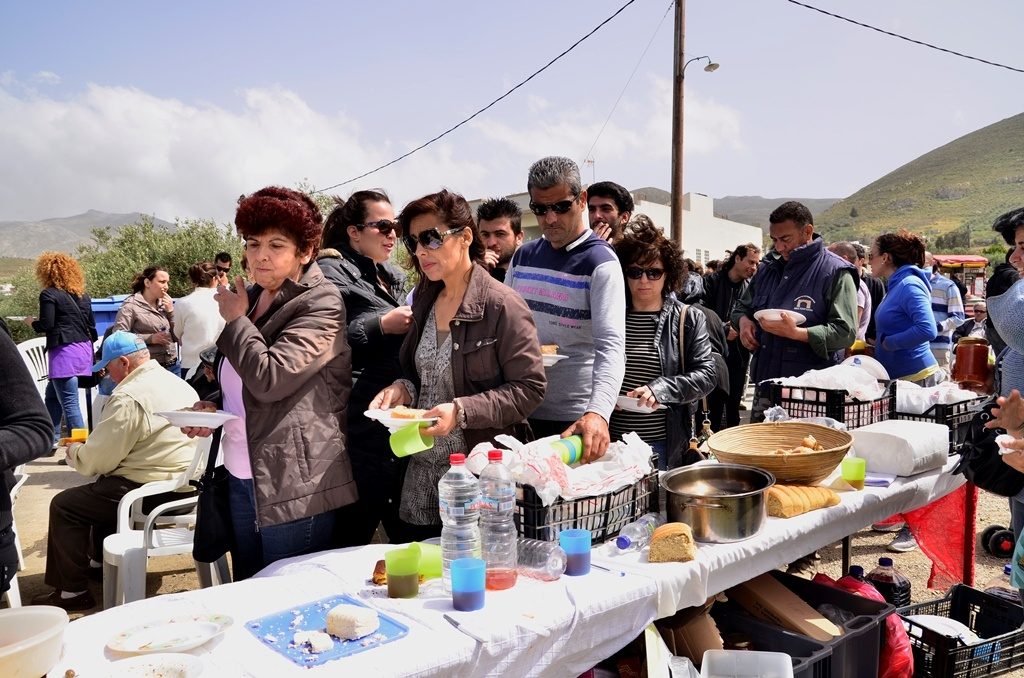 At social events, such as weddings or christenings, as well as at religious feasts, the main dish is pilaf, while special bread loaves are also prepared, decorated with exceptional skill and artistry, the famous gamokouloura or xobliasta psomia (literally: wedding bread loaves or ‘embroidered’ bread loaves). Furthermore, xerotigana (honey-dipped spiral pastries) as well as amygdalota (marzipan sweets) are offered at weddings and at other important social events. The drink offered at weddings is soumada (a drink made with almond ‘milk’) along with plenty of local varieties of wine.