Crete in general, and Heraklion more than any other prefecture, has been known as one of the most important wine producing territories since as early as the Minoan Period, with high quality wines and famous wine-making grape varieties. The centuries old viticulture is confirmed by finds from Archanes and Vathypetro, territories which still produce some of the most famous Cretan wines. 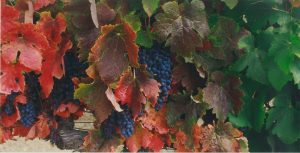 The Cretan vineyard, the most traditional in Europe, starts at an altitude of about 600 metres and stretches all the way down to the shores, following the versatile terrain, over an incessant alteration of hills and valleys that surprise and enchant visitors.

The mild, moderate winter and the dry hot summer of Crete, with its generous sunshine and the cool sea winds ensure a comfortable vegetation cycle without surprises or any particular problems.

For this reason, it is no surprise that Crete has a 4,000-year-old winemaking tradition. This is confirmed by the stomping vat, the oldest known in the world, discovered at Vathypetro, as well as the one found at Castello, Katalagari. Indeed, local winemaking has known periods of major trade flourish. Important turning points in its long, magnificent history, were the period between the 1st and 2nd centuries A.D., when Cretan wines sealed in artistic vases travelled around the Mediterranean and the period of Venetian rule (12th –16th century) when Cretan wine, namely Malvasia, reached the peak of its fame. Today, the fact that the Cretan diet is considered ideal for health has contributed to the recognition of the positive effect that Cretan wine also has on health, when consumed in moderation.

Lovers of good wine, you have arrived at the right place, the Mediterranean zone of the Municipality of Archanes-Asterousia, one of the major wine-producing territories of Crete, with numerous wineries open to visitors, offering guided tours and tastings. At the wineries or the Town Hall you can find printed material on Cretan ‘Wine Routes’, which will guide you on a circular tour of the hinterland, covering the entire wine-making zone of the prefecture and giving visitors the opportunity to get to know many representative viticulture-winemaking zones of the territory.